Mediators of Symptom Cluster and Employment in People with Multiple Sclerosis 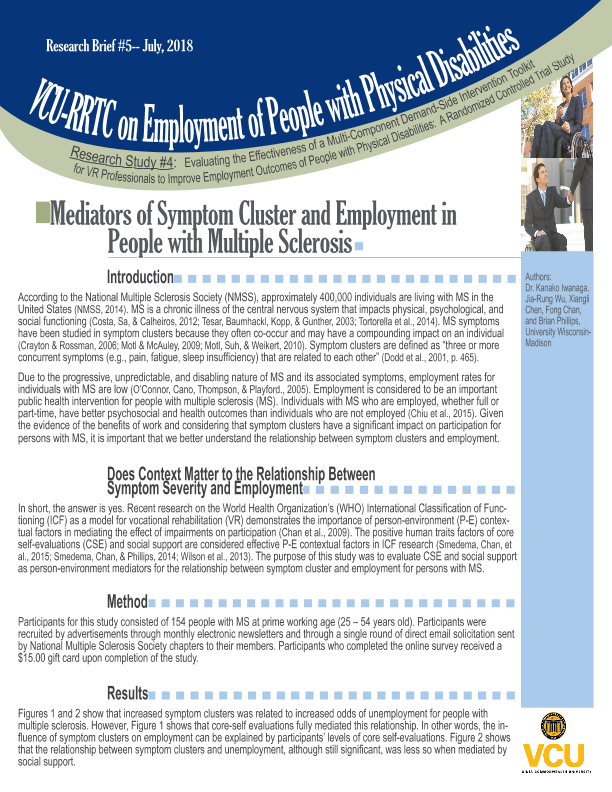 According to the National Multiple Sclerosis Society (NMSS), approximately 400,000 individuals are living with MS in the United States (NMSS, 2014). MS is a chronic illness of the central nervous system that impacts physical, psychological, and social functioning (Costa, Sa, & Calheiros, 2012; Tesar, Baumhackl, Kopp, & Gunther, 2003; Tortorella et al., 2014). MS symptoms have been studied in symptom clusters because they often co-occur and may have a compounding impact on an individual (Crayton & Rossman, 2006; Motl & McAuley, 2009; Motl, Suh, & Weikert, 2010). Symptom clusters are defined as “three or more concurrent symptoms (e.g., pain, fatigue, sleep insufficiency) that are related to each other” (Dodd et al., 2001, p. 465).

Due to the progressive, unpredictable, and disabling nature of MS and its associated symptoms, employment rates for individuals with MS are low (O’Connor, Cano, Thompson, & Playford., 2005). Employment is considered to be an important public health intervention for people with multiple sclerosis (MS). Individuals with MS who are employed, whether full or part-time, have better psychosocial and health outcomes than individuals who are not employed (Chiu et al., 2015). Given the evidence of the benefits of work and considering that symptom clusters have a significant impact on participation for persons with MS, it is important that we better understand the relationship between symptom clusters and employment.

Does Context Matter to the Relationship Between Symptom Severity and Employment?

In short, the answer is yes. Recent research on the World Health Organization’s (WHO) International Classification of Functioning (ICF) as a model for vocational rehabilitation (VR) demonstrates the importance of person-environment (P-E) contextual factors in mediating the effect of impairments on participation (Chan et al., 2009). The positive human traits factors of core self-evaluations (CSE) and social support are considered effective P-E contextual factors in ICF research (Smedema, Chan, et al., 2015; Smedema, Chan, & Phillips, 2014; Wilson et al., 2013). The purpose of this study was to evaluate CSE and social support as person-environment mediators for the relationship between symptom cluster and employment for persons with MS.

Participants for this study consisted of 154 people with MS at prime working age (25 – 54 years old). Participants were recruited by advertisements through monthly electronic newsletters and through a single round of direct email solicitation sent by National Multiple Sclerosis Society chapters to their members. Participants who completed the online survey received a $15.00 gift card upon completion of the study.

National Multiple Sclerosis Society. What is MS? (2014). Retrieved from http://www.nationalmssociety.org/What-is-MS

This product was developed by VCU-RRTC on Employment for People with Physical Disabilities (VCU-RRTC) that is funded by the National Institute on Disability, Independent Living, and Rehabilitation Research (NIDILRR) grant #90RT503502.  NIDILRR is a Center within the Administration for Community Living (ACL), Department of Health and Human Services (HHS). The contents do not necessarily represent the policy of NIDILRR, ACL, HHS, and you should not assume endorsement by the Federal Government. Virginia Commonwealth University, Rehabilitation Research and Training Center is an equal opportunity/affirmative action institution providing access to education and employment without regard to age, race, color, national origin, gender, sexual orientation, veteran’s status, political affiliation, or disability.

The authors for this research brief are Kanako Iwanaga1, Jia-Rung Wu, Xiangli Chen, Fong Chan, and Brian Phillips from the  University of Wisconson-Madison.  Questions on this brief should be directed to Dr. Brian Phillips at mbnphillips2@wisc.edu. Requests for accommodations or questions on the VCU-RRTC should be directed to: Dr. Katherine Inge at kinge@vcu.edu or 804-828-5956 Please visit us at:  http://www.vcurrtc.org