Evaluating the Effectiveness of a Multi-Component Demand-Side Intervention Toolkit or VR Professionals to Improve Employment Outcomes of People with Physical Disabilities: A Randomized Controlled Trial Study - Relationships and Social Roles 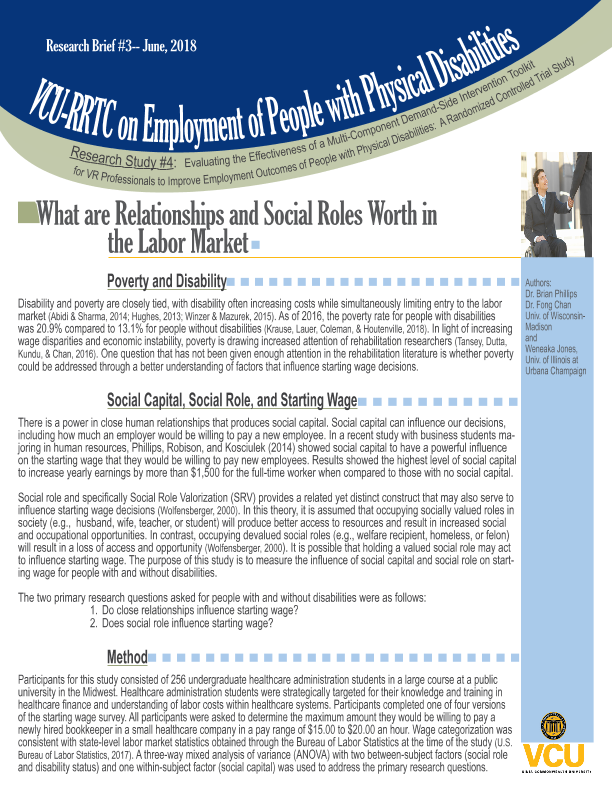 What are Relationships and Social Roles Worth in the Labor Market

Disability and poverty are closely tied, with disability often increasing costs while simultaneously limiting entry to the labor market (Abidi & Sharma, 2014; Hughes, 2013; Winzer & Mazurek, 2015). As of 2016, the poverty rate for people with disabilities was 20.9% compared to 13.1% for people without disabilities (Krause, Lauer, Coleman, & Houtenville, 2018). In light of increasing wage disparities and economic instability, poverty is drawing increased attention of rehabilitation researchers (Tansey, Dutta, Kundu, & Chan, 2016). One question that has not been given enough attention in the rehabilitation literature is whether poverty could be addressed through a better understanding of factors that influence starting wage decisions.

Social role and specifically Social Role Valorization (SRV) provides a related yet distinct construct that may also serve to influence starting wage decisions (Wolfensberger, 2000).  In this theory, it is assumed that occupying socially valued roles in society (e.g., husband, wife, teacher, or student) will produce better access to resources and result in increased social and occupational opportunities. In contrast, occupying devalued social roles (e.g., welfare recipient, homeless, or felon) will result in a loss of access and opportunity (Wolfensberger, 2000). It is possible that holding a valued social role may act to influence starting wage. The purpose of this study is to measure the influence of social capital and social role on starting wage for people with and without disabilities.

Participants for this study consisted of 256 undergraduate healthcare administration students in a large course at a public university in the Midwest. Healthcare administration students were strategically targeted for their knowledge and training in healthcare finance and understanding of labor costs within healthcare systems. Participants completed one of four versions of the starting wage survey. All participants were asked to deter-mine the maximum amount they would be willing to pay a newly hired bookkeeper in a small healthcare com-pany in a pay range of $15.00 to $20.00 an hour. Wage categorization was consistent with state-level labor market statistics obtained through the Bureau of Labor Statistics at the time of the study (U.S. Bureau of Labor Statistics, 2017). A three-way mixed analysis of variance (ANOVA) with two between-subject factors (social role and disability status) and one within-subject factor (social capital) was used to address the primary research questions.

Findings suggest that social capital and social role have enough value to increase starting wages by hundreds if not thousands of dollars. More research is needed to understand the effect in real business decisions, but early evidence suggests rehabilitation professionals should focus on these two elements when assisting someone in the hiring process.
An increased focus on relationships and social role aligns perfectly with the Workforce Investment Opportunity Act (WIOA), which emphasizes the importance of vocational rehabilitation providers developing meaningful relationships with employers as well as expanding the services that state vocational rehabilitation agencies can provide to employers.  Professionals can do more to emphasize existing or potential social capital between the hiring company and (a) themselves, (b) their clients, or (c) or others in the client’s social network. A rehabilitation professional can also assist in this effort by helping clients to understand the potential for sharing valued social roles to improve opportunities and also to identify valued social roles they may currently hold or that they could acquire.

Tansey, T. N., Dutta, A., Kundu, M., & Chan, F. (2016).  From admiration of the problem to action: Addressing the limited success in vocational rehabilitation of persons from diverse racial and cultural backgrounds. Journal of Vocational Rehabilitation, 45, 117-119.

Acknowlegements:  This product was developed by VCU-RRTC on Employment for People with Physical Disabilities (VCU-RRTC) that is funded by the National Institute on Disability, Independent Living, and Rehabilitation Research (NIDILRR) grant #90RT503502.  NIDILRR is a Center within the Administration for Community Living (ACL), Department of Health and Human Services (HHS). The contents do not necessarily represent the policy of NIDILRR, ACL, HHS, and you should not assume endorsement by the Federal Government.