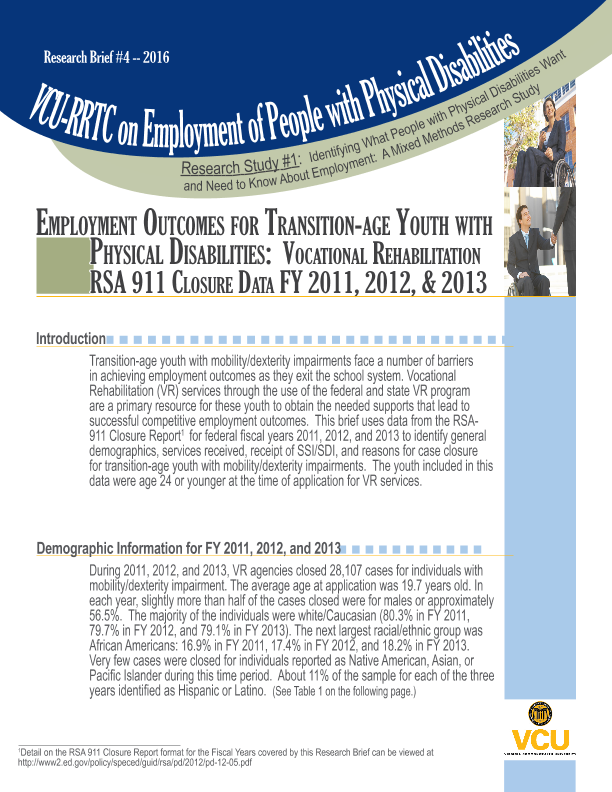 Transition-age youth with mobility/dexterity impairments face a number of barriers in achieving employment outcomes as they exit the school system. Vocational Rehabilitation (VR) services through the use of the federal and state VR program are a primary resource for these youth to obtain the needed supports that lead to successful competitive employment outcomes. This brief uses data from the RSA-911 Closure Report[1] for federal fiscal years 2011, 2012, and 2013 to identify general demographics, services received, receipt of SSI/SDI, and reasons for case closure for transition-age youth with mobility/dexterity impairments. The youth included in this data were age 24 or younger at the time of application for VR services.

STATUS OF PARTICIPANTS AT POINT OF CASE CLOSURE BY VR

When reviewing this brief, the reader needs to know that each VR agency submits to the Federal Rehabilitation Services Administration (RSA) a RSA 911 Closure Report. Each 911 Report contains information on individuals who terminated VR services during an identified Fiscal Year. Termination of VR Services is reported as one of four Case Closure codes by a VR agency to include the following:

The percentages of males and females who achieved an employment outcome were consistent all three years. In addition, the majority of the individuals whose cases were closed in Status 26 during this time were white/Caucasian. Interestingly, the percentages of African American and Hispanic or Latino who achieved employment outcomes were lower each year in the study period than the percent for that race/ethnicity at application.

COMPARISON OF SERVICES FOR PARTICIPANTS CLOSED IN STATUS 26 OR 28

Approximately two-thirds of transition-age youth with mobility/dexterity impairments whose cases were closed with an employment outcome received Assessment and/or VR Counseling and Guidance services. Slightly less than half, received College or University Training, with approximately 44% of those closed with an employment outcome having earned a post-secondary degree (14.5% Associate degree; 24.5% Bachelor degree; and 5% Master degree) prior to VR case closure. Close to 40% of clients whose cases were closed with an employment outcome received Job Placement Assistance and/or Diagnosis and Treatment services. Transportation, Job Search Assistance, Information and Referral, and Maintenance were the next most frequently received services. On-the-Job Supports were received by approximately 20%, while Supported Employment services were received by less than 10% across all three years. A primary difference between On-the-Job Supports and Supported Employment services is that supported employment would include the extended on-going support component that would continue after VR case closure.

The following table presents information on number of hours worked per week, as well as weekly and hourly earnings for transition-age youth with mobility/dexterity impairments who terminated VR services with an employment outcome. The average number of hours worked per week was consistent across the three years: 30.6 hours during FY 2011, 30.7 hours in 2012, and 30.4 hours in 2013. Weekly earnings averaged $375.96 across the three fiscal years and average hourly earnings were approximately $12.30.

Research indicates that youth with disabilities need assistance in advocating for themselves in the workplace and need help with learning how to ask for accommodations. Many youth come from experiences where supports are frequently provided by their school system and/or by parents and guardians. They may find it difficult to know what supports they will need in the workplace and how to ask for these supports. Youth transitioning from school also may worry about being treated differently than their co-workers, yet they cannot receive accommodations without disclosing (Lindsay et al., 2015). In seeking to improve the employment outcome rates for transition-age youth with mobility/dexterity impairments, VR programs and counselors need to address the inherent challenges youth with disabilities face in areas such as self-advocacy and disclosure.

To increase the successful employment outcome rates for minority populations, VR counselors should recognize that cultural diversity may complicate access and response to services. For example, communication between the VR counselor and a VR participant from a minority ethnic population might be inhibited by variations in diction, speech patterns, vocabulary, and cultural experiences (Amezcua, 2014). VR counselors should strive to provide culturally and linguistically responsive services to help overcome the disadvantages often faced by minority youth with disabilities.

Overall, more transition-age youth with a mobility/dexterity impairments were closed by VR without an employment after an IPE was implemented than those who were closed with an employment outcome. In comparison, the national rehabilitation rate for all individuals closed by VR agencies after an IPE was implemented was 55.4% in FY 2012 and 58.5% in FY 2013 (RSA, 2016). VR agencies and counselors need to focus attention on strategies that hold the most promise for improving employment outcome rates among transition-age youth with mobility/dexterity impairment.

It is apparent from the age and educational level indicators of the study sample at application that a minority of students and youth in this population applied for VR services while still participating in a secondary level program. The average age at application for VR services for the study sample was 19.7. Approximately 60% of applicants had completed their secondary level education at time of application. It is clear that VR programs need to focus on diversifying and expanding transition oriented vocational rehabilitation services to a younger group of secondary level students and youth with a primary disability of mobility/dexterity impairment.

The priorities, funding and service guidelines established in the Workforce Innovation and Opportunity Act (WIOA) are a timely resource for VR agencies in diversifying and expanding transition services. WIOA sets a clear goal that youth with disabilities will obtain integrated competitive employment or postsecondary education as a transition outcome. Research has demonstrated that vocational activities, including community work experiences while in secondary education, is a primary predictor of successful employment outcomes individuals with disabilities (Lindstrom et al., 2013; Shandra & Hogan, 2008; Wehman, Sima, et al., 2015). WIOA builds on this research by emphasizing pre-employment transition services. For example, 15% of state Title I VR Funds must be used for pre-employment transition services for in-school youth. These services include:

Additional specified activities for local VR area offices, based on availability of funds, include:

These youth oriented revisions to vocational rehabilitation move potential initiation of VR involvement to an earlier age. WIOA extends this involvement to as young as 14 years old, strengthening vocational rehabilitation and school partnership opportunities. WIOA has also expanded the definition of supported employment to include customized employment, thus expanding the employment focused tools available to VR counselors in working with individuals with significant and the most significant disabilities. The goals and service requirements of WIOA, particularly in the area of pre-vocational services, provide VR agencies the opportunity to initiate services to younger and more diverse population of transition-age youth with a primary mobility/dexterity impairment.

There are a number of state VR agencies identified in this study whose success rate at achieving employment outcomes in close to and at times above 50% of applicants for VR services who are transition-age youth with a mobility/dexterity impairment. In comparison, the national average success rate of is approximately 30%. Identifying the specific reasons for these higher success rates was beyond the scope of this study. However, these higher success rates point clearly to the ability of VR participants to achieve employment success and that the current 30% national employment outcome rate for VR participants substantially understates the employment potential of this population. State VR agencies in Iowa, Vermont, Arkansas, Nebraska, and West Virginia can provide valuable information on VR service profiles with demonstrated effectiveness in providing VR services and supports leading to employment outcomes for transition-age youth with mobility/dexterity

In summary, the information gained from this study can serve as a baseline for research and demonstration efforts focused on measuring progress in the coming years in VR efforts to support transition-age youth with a primary disability of mobility/dexterity impairment in achieving post-secondary and employment outcomes consistent with their goals and interests. In recent years, the primary population from this target group benefiting from VR services in terms of achieving an employment outcome was individuals who applied for VR services after completion of their secondary program. Consistent with the goals of the Workforce Innovations and Opportunities Act, VR agencies need to aggressively reach out to a younger secondary-age population while working closely with secondary and post-secondary level programs and employers to assist a more diverse population of transition-age youth enter and benefit from VR services.

Information for this research brief was developed by the VCU-RRTC on Employment of People with Physical Disabilities. The authors for this issue are William G. Revell, Katherine J. Inge, Robert E. Cimera, and Hannah E. Seward. If you have questions on this brief or on the VCU-RRTC, you may contact Dr. Inge, Project Director at kinge@vcu.edu or (804) 828-5956. For more information on the VCU-RRTC, please visit http://www.vcurrtc.org.

VCU-RRTC is an equal opportunity/affirmative action institution providing access to education and employment without regard to age, race, color, national origin, gender, religion, sexual orientation, veteran's status, political affiliation, or disability. The VCU-RRTC is funded by the National Institute on Disability, Independent Living, and Rehabilitation Research (NIDILRR grant number #90RT503502). NIDILRR is a Center within the Administration for Community Living (ACL), Department of Health and Human Services (HHS). However, these contents do not necessarily represent the policy of NIDILRR, and you should not assume endorsement by the Federal Government. If accommodations are needed, please contact Dr. Inge at kinge@vcu.edu or (804) 828-5956.

[1] Detail on the RSA-911 Closure Report format for the Fiscal Years covered by this Research Brief can be viewed at http://www2.ed.gov/policy/speced/guid/rsa/pd/2012/pd-12-05.pdf