Perceptions of Quality of Employment Outcomes after Multiple Sclerosis: A Qualitative Study 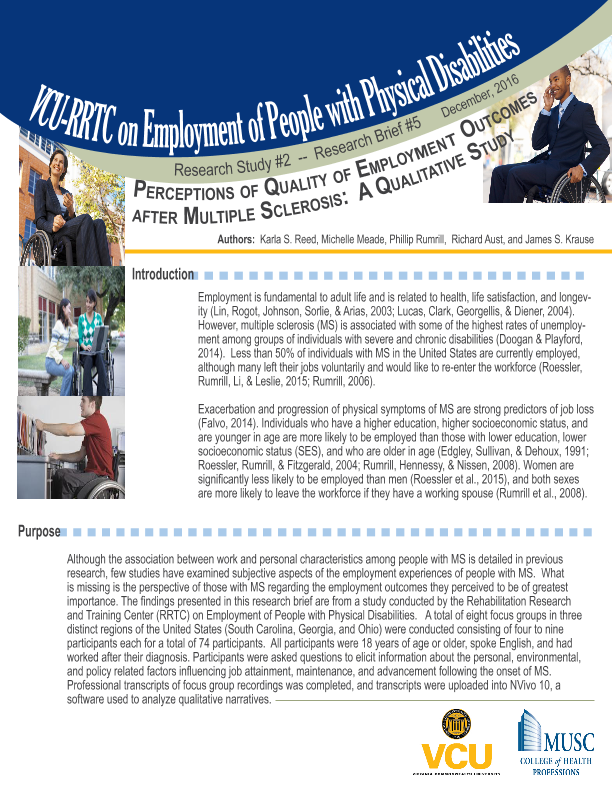 Employment is fundamental to adult life and is related to health, life satisfaction, and longevity (Lin, Rogot, Johnson, Sorlie, & Arias, 2003; Lucas, Clark, Georgellis, & Diener, 2004). However, multiple sclerosis (MS) is associated with some of the highest rates of unemployment among groups of individuals with severe and chronic disabilities (Doogan & Playford, 2014).  Less than 50% of individuals with MS in the United States are currently employed, although many left their jobs voluntarily and would like to re-enter the workforce (Roessler, Rumrill, Li, & Leslie, 2015; Rumrill, 2006).

Exacerbation and progression of physical symptoms of MS are strong predictors of job loss (Falvo, 2014). Individuals who have a higher education, higher socioeconomic status, and are younger in age are more likely to be employed than those with lower education, lower socioeconomic status (SES), and who are older in age (Edgley, Sullivan, & Dehoux, 1991; Roessler, Rumrill, & Fitzgerald, 2004; Rumrill, Hennessy, & Nissen, 2008). Women are significantly less likely to be employed than men (Roessler et al., 2015), and both sexes are more likely to leave the workforce if they have a working spouse (Rumrill et al., 2008).

Although the association between work and personal characteristics among people with MS is detailed in previous research, few studies have examined subjective aspects of the employment experiences of people with MS.  What is missing is the perspective of those with MS regarding the employment outcomes they perceived to be of greatest importance. The findings presented in this research brief are from a study conducted by the Rehabilitation Research and Training Center (RRTC) on Employment of People with Physical Disabilities.   A total of eight focus groups in three distinct regions of the United States (South Carolina, Georgia, and Ohio) were conducted consisting of four to nine participants each for a total of 74 participants.  All participants were 18 years of age or older, spoke English, and had worked after their diagnosis. Participants were asked questions to elicit information about the personal, environmental, and policy related factors influencing job attainment, maintenance, and advancement following the onset of MS. Professional transcripts of focus group recordings was completed, and transcripts were uploaded into NVivo 10, a software used to analyze qualitative narratives.

Results indicate that the meaning and motivation participants ascribed to work were many and multi-dimensional.  Participants described employment as a means of financially supporting oneself and family, providing a sense of purpose and accomplishment, defining oneself, promoting socialization and limiting isolation, providing happiness and fulfillment, and meeting the need to help and inspire others. Focus group members felt better about themselves when they had something to do and a reason to get up, although the stress and burden of working did take its toll at times.

The findings from this study shed potentially important light on the meaning that people with MS ascribe to their career development. Results provide some encouraging evidence that people with MS (most in this study were still employed) view work as an important social role and as a means of staying active and retaining one’s identity. By understanding the considerations that impede or enhance participants’ prospects for ongoing employment after diagnosis with MS, rehabilitation professionals can develop consumer-centered interventions. These interventions should facilitate work-motivating conditions in the lives of people with MS, thereby increasing the likelihood of fuller participation in the world of work for this experienced, well-trained, but all-too-often disenfranchised population.

Information for this FAQ fact sheet was developed for the VCU-RRTC on Employment of People with Physical Disabilities by collaborative partners at the Medical University of South Carolina (MUSC) and the Shepherd Center. Karla Reed, Richard Aust, and Dr. James Krause are located at the MUSC in Charleston, South Carolina.  Dr. Michelle Meade is located at the University of Michigan, Ann Arbor. Dr. Phillip Rumrill is located at Kent State Univeristy, Kent Ohio.  Questions on this fact sheet should be directed to Dr. James Krause at krause@musc.edu or by calling 1-866-313-9963. Questions on the VCU-RRTC, or accommodations should be directed to Dr. Katherine Inge, Project Director at [kinge@vcu.edu] or (804) 828-5956. For more information on the VCU-RRTC, please visit http://www.vcurrtc.org.