Disclosing Disability in the Workplace: Perspectives of Workers with Multiple Sclerosis 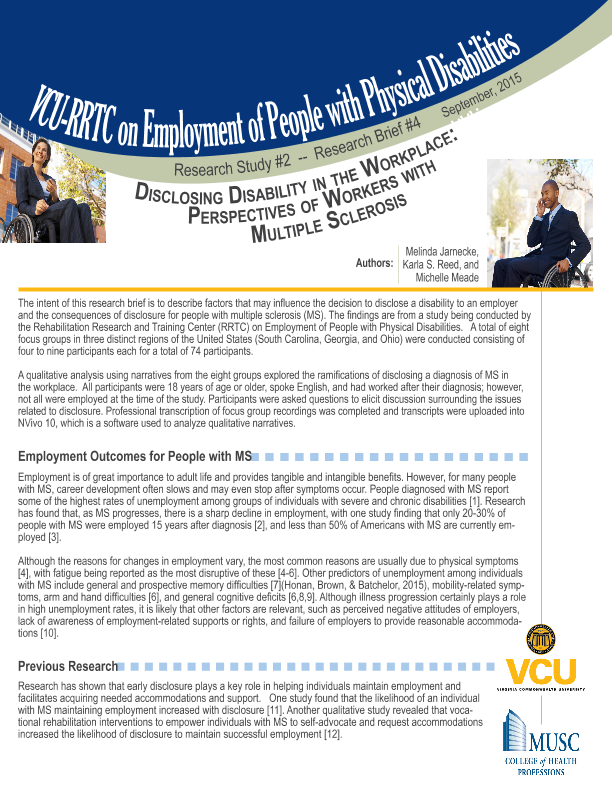 The intent of this research brief is to describe factors that may influence the decision to disclose a disability to an employer and the consequences of disclosure for people with multiple sclerosis (MS). The findings are from a study being conducted by the Rehabilitation Research and Training Center (RRTC) on Employment of People with Physical Disabilities.   A total of eight focus groups in three distinct regions of the United States (South Carolina, Georgia, and Ohio) were conducted consisting of four to nine participants each for a total of 74 participants.

A qualitative analysis using narratives from the eight groups explored the ramifications of disclosing a diagnosis of MS in the workplace.  All participants were 18 years of age or older, spoke English, and had worked after their diagnosis; however, not all were employed at the time of the study. Participants were asked questions to elicit discussion surrounding the issues related to disclosure. Professional transcription of focus group recordings was completed and transcripts were uploaded into NVivo 10, which is a software used to analyze qualitative narratives.

Employment Outcomes for People with MS

Employment is of great importance to adult life and provides tangible and intangible benefits. However, for many people with MS, career development often slows and may even stop after symptoms occur. People diagnosed with MS report some of the highest rates of unemployment among groups of individuals with severe and chronic disabilities [1]. Research has found that, as MS progresses, there is a sharp decline in employment, with one study finding that only 20-30% of people with MS were employed 15 years after diagnosis [2], and less than 50% of Americans with MS are currently employed [3].

Although the reasons for changes in employment vary, the most common reasons are usually due to physical symptoms [4], with fatigue being reported as the most disruptive of these [4-6]. Other predictors of unemployment among individuals with MS include general and prospective memory difficulties [7](Honan, Brown, & Batchelor, 2015), mobility-related symptoms, arm and hand difficulties [6], and general cognitive deficits [6,8,9]. Although illness progression certainly plays a role in high unemployment rates, it is likely that other factors are relevant, such as perceived negative attitudes of employers, lack of awareness of employment-related supports or rights, and failure of employers to provide reasonable accommodations [10].

Research has shown that early disclosure plays a key role in helping individuals maintain employment and facilitates acquiring needed accommodations and support.   One study found that the likelihood of an individual with MS maintaining employment increased with disclosure [11]. Another qualitative study revealed that vocational rehabilitation interventions to empower individuals with MS to self-advocate and request accommodations increased the likelihood of disclosure to maintain successful employment [12].

Disclosure is more prevalent among those with greater physical disabilities [8]. This suggests that disclosure is more likely to occur with a higher visibility of impairment. However, people with MS often do not have symptoms that are visible to an employer [13]. For those with less visible or invisible symptoms, such as cognitive impairment, the decision to disclose may be more difficult. This is especially problematic given that cognitive impairments are the most common symptoms associated with deterrence of labor force participation after MS [14-16].

In order to benefit from work-related accommodations, individuals must disclose their disability to the appropriate personnel. These individuals must decide whether to disclose or not to disclose and whether the perceived benefits are worth the perceived risks. Previous studies indicate that potential prejudice and social stigma may occur after disclosure preventing some individuals from disclosing, even though this means foregoing accommodations and support [17, 18]. Individuals report that they need information surrounding disclosure and accommodations [1] as well as a better understanding of how they are protected legally [19].

This study identified eight themes related to disclosure that fell into two categories: decision to disclose and consequences of disclosure. In the category of decision to disclose, themes included (1) disclosing to explain, prepare, or educate; (2) general disclosure, no concerns; (3) limiting, delaying, or deciding not to disclose; and (4) unsure about future disclosure. Within consequences of disclosure, there were also four themes that emerged including: (1) positive and supportive reactions; (2) mixed or variable reaction in the same work environment; (3) no real reaction, positive or negative; and (4) leading to termination of employment. Quotes are provided to illustrate the themes within these two categories.

Findings from this study reveal an equally wide range of observations related to the consequences of disclosure, being highly favorable for some, yet very negative for others. Seeing others disclose may have encouraged individuals to disclose, yet some participants felt negative outcomes as a result. Others had neutral reactions. The work environment appeared important, but not necessarily as straightforward as might be anticipated. For instance, those in health care sometimes thought that the diagnosis would be more readily accepted, yet the actual experiences were much less favorable.

Despite literature supporting the notion that disclosure and receipt of accommodations is associated with greater labor force participation, the decision to disclose is personal, and reasons to disclose or not to disclose are multifaceted. The responses of the participants with MS in this study provide information in general terms on disclosure, but how can this information be used? How can individuals with MS better understand the decision to disclose in a way that will assist them to make disclosures decisions? How can this information be used by counselors and other professionals to assist them in making these decisions?

Behavioral theory can help.  Developed by Fishbein and colleagues, the Integrated Behavioral Model is an adaptation of earlier models aimed at predicting behaviors.  Overall, there are three primary areas of interest that the model utilizes to predict behavior intent: 1) Attitudes, 2) Subjective Norms, and 3) Personal Agency.   Together, Attitudes, Subjective Norms, and Personal Agency all influence the intent to perform a behavior, and ultimately the likelihood of the behavior being performed [20].

Despite literature supporting the notion that disclosure and receipt of accommodations is associated with greater labor force participation, the decision to disclose is personal, and reasons to disclose or not to disclose are multifaceted.  Because the diagnosis of MS often occurs among individuals who are in the prime of their work lives, how they think about and handle disclosure within the employment context can greatly impact social, participatory, financial, and psychological outcomes. Of particular consideration is the degree of time as well as personal identity and investment that is often associated with full-time employment and the impact of having (or not having) a supportive, accommodating environment that promotes the most positive outcomes. While the decision to disclose is and must remain an individual one, the consequences of disclosure can and should be regulated and enforced to a greater extent. In particular, results highlight the importance of continuing to disseminate the information, policies, and accommodations that are available to support and enhance employment for individuals with MS and all disabilities to a wider audience and in more effective ways.

Information for this FAQ fact sheet was developed for the VCU-RRTC on Employment of People with Physical Disabilities by collaborative partners at the Medical University of South Carolina and the Shepherd Center. Melinda Jarnecke, Karla Reed, Aaron Haas and Dr. James Krause are located at the MUSC in Charleston, South Carolina.  Dr. Michelle Meade is located at the University of Michigan, Ann Arbor.  Questions on this fact sheet should be directed to Dr. James Krause at krause@musc.edu or by calling 1-866-313-9963. Questions on the VCU-RRTC, or accommodations should be directed to Dr. Katherine Inge, Project Director at [kinge@vcu.edu] or (804) 828-5956. For more information on the VCU-RRTC, please visit http://www.vcurrtc.org.