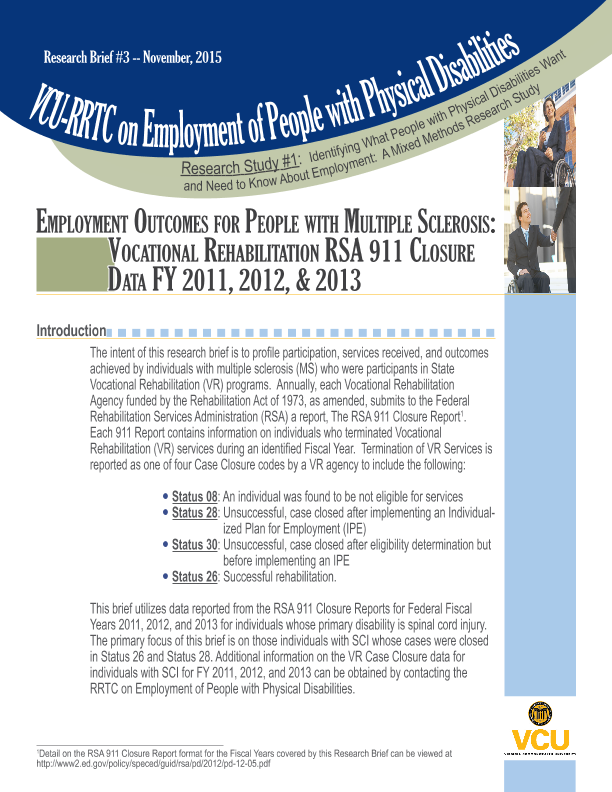 This brief utilizes data reported from the RSA 911 Closure Reports for Federal Fiscal Years 2011, 2012, and 2013 for individuals whose primary disability is multiple sclerosis. The primary focus of this brief is on those individuals with MS whose cases were closed in Status 26 and Status 28. Additional information on the VR Case Closure data for individuals with MS for FY 2011, 2012, and 2013 can be obtained by contacting the RRTC on Employment of People with Physical Disabilities.

From 2011 to 2013, a total of 1,758,487 individuals with disabilities had their cases officially closed by VR agencies.  Of this number, 6,865 were participants with MS: 2,381 in 2011, 2,201 in 2012, and 2,283 in 2013. The demographic characteristics of these individuals at time of application for VR services are presented in Table 1. The number of cases VR closed for males versus females remained fairly consistent across the three years.  More cases were closed for females than males with approximately two thirds of the cases closed were female during each of the three years. The age range of the individuals was 25 to 64 at the time of application with a mean age of 44 for FY 2011, 2012, and 2013.  The majority of the individuals whose cases were closed during this time period were white/Caucasian with 78.7% in FY 2011, 76.2% in FY 2012, and 74.6% in FY 2013.  This was followed by individuals who were African American: 20.0% in FY 2011, 22.6% in FY 2012, and 24.8% in FY 2013. Very few cases were closed for individuals reported as Native American, Asian, or Pacific Islander during this time period.  Approximately five percent of the sample for each of the three years was identified as Hispanic or Latino.

STATUS OF PARTICIPANTS AT POINT OF CASE CLOSURE BY VR

Table 2 presents information on participants with MS whose cases were closed in all closure categories during the time period reported in this brief.   A small percentage of the individuals with MS who applied for services exited as an applicant, exited during or after a trial work experience, or exited from an order of selection waiting list.  Slightly more than one in every four VR applicants terminated after being found eligible for services but before an IPE was signed. VR case closures for individuals who had been found eligible for services but did not sign an IPE were 28.9% in FY 2011, 29.8% in FY 2012, and 29.6% in FY 2013.  The percentage for individuals who had a signed IPE but exited before receiving services was very small.

Table 3: Status at Case Closure for Participants Who Had an IPE Implemented

SERVICES FOR PARTICIPANTS CLOSED IN STATUS 26 OR 28

More than 2.3 million people in the world are estimated to have Multiple Sclerosis (MS), with approximately 450,000 of these individuals living in the United States (National Multiple Sclerosis society [NMSS], 2015).  In America, the national incidence rate of new MS cases has increased steadily over the past 50 years (NMSS, 2015). Because of the wide range of symptoms and the unpredictable nature of the MS, the disability has a significant impact on employment.  Although 98 percent of people with MS have employment histories and 82 percent were still working at the time of diagnosis (Roessler, Rumrill, Li, & Leslie, 2015), the vast majority of workers with MS disengage from the workforce before retirement age.  One source estimated that the current rate of unemployment for people with MS in the United States is between 55% and 70% (Rumrill, 2014). The result is a disproportionately high level of unemployment among a group of both qualified and experienced workers.

These findings could inform VR planning and service delivery efforts with these experienced, well-educated, and yet often disenfranchised workers.  The first observation that derives from the present findings is the overall characteristic similarity between this sample and known population parameters of people with MS.  Like Americans with MS in general, VR consumers with MS were predominantly female, of European lineage, and well-educated (Minden, Frankel, Hadden, Perloff, Srinath, & Hoaglin, 2006).  African Americans, who comprise approximately five percent of Americans with MS, were overrepresented in the present sample, whereas the five percent proportion of Hispanics/Latinos in this sample was consistent with their five percent representation in the general MS population (Amezcua, 2014).  Given that African Americans and Hispanics/Latinos had lower Status 26 closure rates than did Caucasians (as evidenced by the fact that higher proportions of these individuals were observed at application for VR services than in the successfully employed [Status 26] outcome group), VR counselors must endeavor to provide culturally and linguistically authentic services to help overcome the double disadvantage that is often faced by people with MS who are of minority heritage (Amezcua, 2014).

One difference between VR clients with MS and the general population of people with MS lies in the rate of part-time versus full-time employment. Across this study’s three-year observation period, a decided majority of the Status 26 closure group reported working fewer than 35 hours per week, with the mean number of hours worked per week hovering around 26.  A 2015 investigation of people with MS conducted by Roessler and colleagues revealed that approximately 80 percent of employed people with MS across the United States worked full-time, and Rumrill et al. (in press) noted that the vast majority of unemployed job-seekers with MS desired full-time employment.  Promoting full-time employment opportunities with benefits is an essential element of VR planning with people with MS, because of their expressed wishes. It enables society to fully benefit from the valuable labor resource that exists within this talented, seasoned, and well-trained population.

At perhaps the most basic level, the reader has to ask whether the approximately 30 percent success rate for people with MS whose cases were closed in Status 26 for VR services is an acceptable figure.  The answer is: probably not.  More than 95 percent of Americans with MS have employment histories, some 82 percent were still working at the time of diagnosis, and 46 percent are college graduates (Roessler et al., 2015).  Nevertheless, only approximately 40 percent of this experienced, highly trained group of workers is presently employed for pay (Bishop et al., 2013; Roessler et al., 2015).  Discouragingly, the rate of labor force participation among people with MS has declined over the past 20 years despite significant advances in medical treatment that find many people with MS leading healthier, more functional lives than ever before (Fraser, Clemmons, Gibbons, & Koepnick, 2009).  We must do better.  Targeted job retention efforts early in the diagnosis that help people with MS address disability-related work limitations before they threaten their ability to continue working have long been described as the preferred vocational intervention for people with MS (Antao et al., 2014; Fraser et al., 2009).  Preventing job loss must be a priority for VR counselors working with people with MS if the current disappointing trends in labor force participation are to be reversed.

Information for this research brief was developed by the VCU-RRTC on Employment of People with Physical Disabilities.  The authors are Katherine J. Inge, Ph.D., O.T.R., Phillip D. Rumrill, Jr., Ph.D., CRC, Rob E. Cimera, Ph.D., and William G. Revell, M.S., M.Ed. For more information on the VCU-RRTC or if accommodations are needed, you may contact Dr. Inge, Project Director at kinge@vcu.edu or (804)-828-5956.  Please visit us at: http://www.vcurrtc.org.

[1] Detail on the RSA 911 Closure Report format for the Fiscal Years covered by this Research Brief can be viewed at http://www2.ed.gov/policy/speced/guid/rsa/pd/2012/pd-12-05.pdf